Who is Majora Carter?

Majora Carter is a visionary voice in city planning who views urban renewal through an environmental lens. The South Bronx native draws a direct connection between ecological, economic and social degradation. Hence her motto: “Green the ghetto!”

With her inspired ideas and fierce persistence, Carter managed to bring the South Bronx its first open-waterfront park in 60 years, Hunts Point Riverside Park. Then she scored $1.25 million in federal funds for a greenway along the South Bronx waterfront, bringing the neighborhood open space, pedestrian and bike paths, and space for mixed-use economic development.

h/t the grist for bringing this incredibly powerful video to my attention.

The EJNet site is a great place to start if you want more information about Environmental Justice.

As barriers go, it’s unimpressive, a line of railroad timbers cutting across a parking lot off West Franklin Street. But, symbolically, it’s a miniature Mason-Dixon line.On one side is gray-haired Southern land baron P.H. Craig. On the other, Long Island Yankee Spencer Young III.

Craig, 70, owns most of the parking lot that serves the Courtyard. About six months ago, Craig blocked off his section with railroad ties and gravel piles. The Courtyard’s parking dropped from 79 spaces to 23.

The move, which Young calls “Machiavellian,” has hobbled his tenants, bothered customers and dragged public officials into private matter.

It’s always interesting and frustrating to me when the property rights of one man triumph over the obvious welfare of the town. The Supreme Court in Kelo v. City of New London did uphold the principle that privately owned property could be forcibly sold to another private entity if it was part of a “comprehensive redevelopment plan”. Clearly, the town of Chapel Hill is going to do no such thing. Not that a giant open parking lot occupying valuable real estate space is any better, but Chapel Hill downtown seems to be owned by well heeled landed gentry always holding out for more money. If they asked me, I would try to get more people to live there, I would get the university a bigger foothold downtown, as my planner friend always says, instead of building a giant outpost campus. There’s little to do downtown other than eat, drink, or buy UNC paraphernalia. But who knows, city planning ain’t my area of expertise. But I have lived downtown for the past 5 years and all I ever did in downtown Chapel Hill was drink (lots), eat (occasionally), fix my bike (a couple of times) and buy a T-Shirt (once). So something is not right.

Meanwhile, the reporter tries very hard to re-enact the American civil war, only in the South!

Maybe there’s a difference between the way the people from the New York area do business and the way people from the South do business,” Page said. “Once they got sort of ticked off at each other … they just haven’t talked anymore.

Right, a brawl involving valuable real estate space and business that boils down to cultural differences, not money, sell me something else brother!

U.S. Given Poor Marks on the Environment – New York Times

A new international ranking of environmental performance puts the United States at the bottom of the Group of 8 industrialized nations and 39th among the 149 countries on the list.European nations dominate the top places in the ranking, which evaluates sanitation, greenhouse gas emissions, agricultural policies, air pollution and 20 other measures to formulate an overall score, with 100 the best possible.The top 10 countries, with scores of 87 or better, were led by Switzerland, Sweden, Norway and Finland. The others at the top were Austria, France, Latvia, Costa Rica, Colombia and New Zealand, the leader in the 2006 version of the analysis, which is conducted by researchers at Yale and Columbia Universities.

U.S. Given Poor Marks on the Environment – New York Times

Go nuclear in the comfort of your own apartment 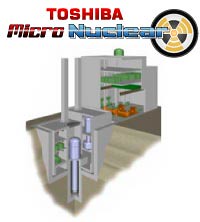 Wow, a nuclear reactor in your apartment building. Of course, no mention about how the fuel would be handled, or what would happen in the case of a fire/flood. But, this is a nuclear enthusiast’s dream!

Toshiba has developed a new class of micro size Nuclear Reactors that is designed to power individual apartment buildings or city blocks. The new reactor, which is only 20 feet by 6 feet, could change everything for small remote communities, small businesses or even a group of neighbors who are fed up with the power companies and want more control over their energy needs.The 200 kilowatt Toshiba designed reactor is engineered to be fail-safe and totally automatic and will not overheat. Unlike traditional nuclear reactors the new micro reactor uses no control rods to initiate the reaction. The new revolutionary technology uses reservoirs of liquid lithium-6, an isotope that is effective at absorbing neutrons. The Lithium-6 reservoirs are connected to a vertical tube that fits into the reactor core. The whole whole process is self sustaining and can last for up to 40 years, producing electricity for only 5 cents per kilowatt hour, about half the cost of grid energy.Toshiba expects to install the first reactor in Japan in 2008 and to begin marketing the new system in Europe and America in 2009.

via the grist blog