Well, it’s been an interesting and full week in Beautiful BC (the other BBC), I found a home: 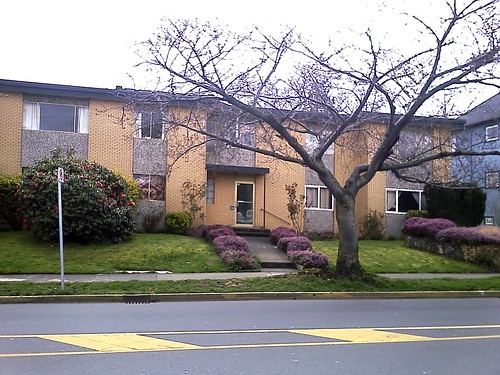 It has a nice view from the window 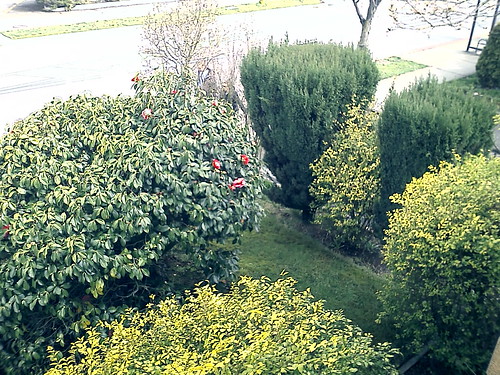 and a not so nice view from the same window, which I shall not post because it gives away my location, you’re either going to have to email me or, god forbid, visit!

And it is in close proximity (5 minute walk) to the wonderful Beacon Hill Park. 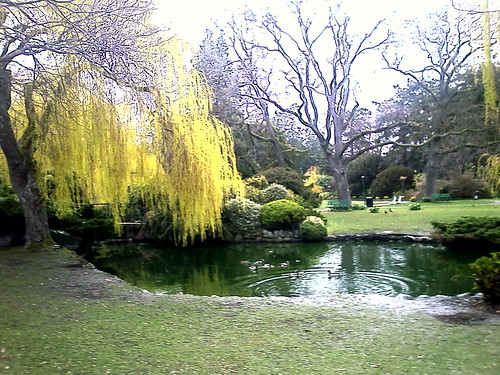 Once the weather gets better (Yes Virginia, long “rant” about the weather’s just up ahead, keep reading!), I look forward to running from home through Beacon Hill Park to the gorgeous seashore on Dallas Road, about a kilometer away (yes, I’ve gone metric). 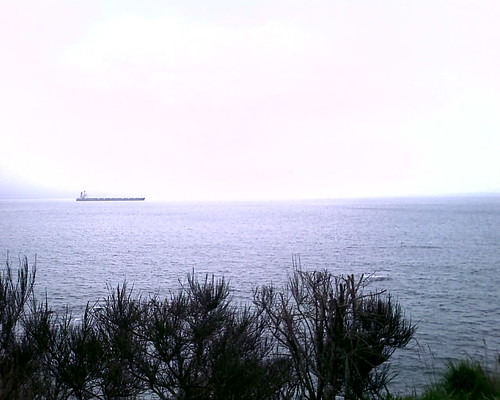 Not the greatest of photos, but it was rainy and foggy. Yes, you can’t really escape nature in this part of the world, even though Victoria’s dense and urban for its size, you turn the corner and suddenly, you’re in a park or on a waterfront.

The weather, well, it’s crazy. Last Tuesday, or Wednesday, I can’t remember, I was at my local Y taking a tour before joining the gym and it was sunny when I entered, my gym guide points the sky out to me 15 minutes later from the 2nd floor of the gym (nice scenic view of beautiful church grounds from the treadmills, BTW) and lo and behold, hail! Apparently, every few years or so, one gets bad weather from Russia, damn them. But, he did say that if you don’t like the weather, just wait 15 minutes, and there it was, sunshine again. I step out after joining the gym and walk back to my funky inn, it starts raining, oh well, it rained 5 minutes then the sun came out, then 5 minutes later, sleet. It did not rain frogs, or cats or dogs, so I did not see everything, but still, way too much weather action in an hour. It is not warm yet, but it is not terribly cold either, always hovers above or around freezing at night, and gets warmer up to 8 degrees (45) in the day time. I am told that it will get warmer soon. Really does not matter, though, it’s still very nice and the people here pretend that the weather does not exist, so I am going to be one with the locals!

In other good news, I found an excellent video store, Pic-a-Flic which is in Cook Street Village, just around the corner (literally) from where I live, nice little neighborhood, lots of “character”, which is sometimes problematic! I haven’t really hung out yet, except to go to a couple of bars and to watch Carolina games and the heartbreaking Davidson-Kansas game (why did the coach make the star of the team and its best shooter also bring the ball up the floor on the last play and make him create his own shot instead of setting up a play where he came off a screen to catch and shoot, his forte, I will never understand) at the Oak Bay Recreation Centre with a fellow Tarheel fan (born and brought up in Victoria!). I just happened to run into him in the bar of the inn I was at for a week and I happened to mention where I was from, he nearly jumped out of his skin! So, I guess that baby blue blood helps once in a while! GO HEELS!

And yes, I started work as well, promises to be interesting, though it is a 35 minute commute, which is what you get for living in a cool neighborhood 🙂

First impressions, well, it’s all very exciting and new, but I have the depressing habit of getting my routines going quickly, so I go to work, go to the gym, eat dinner, read blogs/novels/surf for a while, and the day’s done, so what’s changed? The drive to work’s much more scenic, the walk to the gym is much nicer, the country’s language, rhetoric, radio, everything is so much more in line with my values (CBC Vancouver occasionally makes NPR sound like Rush Limbaugh, I kid you not!). There are tons of organic markets, farmers’ markets (summer only), the produce is generally cheap, though packaged goods are expensive, Michael Pollan would approve!

Victoria has its warts, there are burgeoning drug and homelessness issues that seem to be driven by income inequality and lack of affordable housing. The climate also attracts people seeking shelter from the brutal winter of the rest of Canada. I am reading and hearing that parts of downtown can be dangerous for cars, not people though.

All in all, an eventful week, can’t believe it’s only been a week, I feel like i’ve been here a lot longer, but I’ve spent exactly 3 nights at my new place.

More later, I might have exhausted all this personal blogging energy, probably back to regularly scheduled blogging soon.