Wow, I woke up at 4 AM Eastern, caught a 6:50 flight out of RDU to Seattle, then drove 3 hours to the ferry, through the most peaceful immigration and customs ever where I forgot to mention my cat and somehow, it was okay! Being a Canadian is just so much nicer than living in the US of A. I got various questions barked at me by US immigration on the way to the states. The person at Canadian was calm, polite and took 30 seconds to clear me, though I guess she missed the pet.

A 1:40 ferry ride + 1/2 hour drive home later, it’s past 10 Eastern Time and I’ve been traveling for 16 hours. Did I mention I did all this with a cat? But, my beastie was the least of my troubles, he was very sweet! The Sherpa Delta carrier we got (on sale!) worked like a charm, very few people knew I had a pet with me at all times, and I was able to actually even smuggle him into the passenger deck of the Tsawwassen-Schwartz Bay ferry! Highly recommended. It fits very nicely under the seat, I was very apprehensive about carrying this supposedly “high maintenance” cat on plane, airport shuttle, car and boat, but he was such a trooper, very proud.

He’s still a little weirded out by the new place, no idea where he is and most definitely does not feel like he’s home. It’s gotten suspiciously quiet all of a sudden, wonder what he’s doing, napping, hopefully.

All right, no more traveling. I was supposed to blog some when I was in North Carolina, somehow, never happened. I don’t blog well when I’m relaxed, apparently. But, I want to snk my teeth into all this carbon tax brouhaha, and I finally found some time to read the definitive guide to Canadian environmental policy, Unnatural Law, so at least I am now not completely ignorant about Canada. 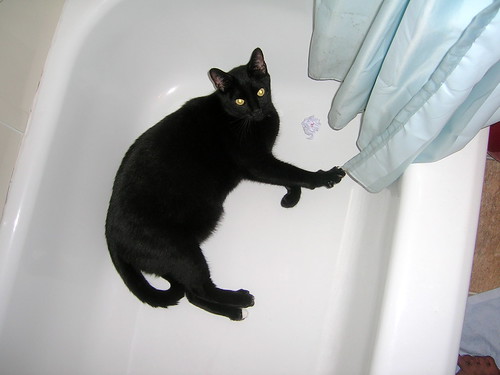 Found the cat, clearly he has a bath tub thing, he’s done this in Chapel Hill too.

Open my mail to see an envelope from Citizenship and Immigration Canada, pick it up and instantly feel that tell tale card, yes, my PR card is finally here, and I guess the photograph I sent them in February from NC finally got to them, hooray, I am now mostly Canadian! If they’d sent it a little earlier, could have avoided this whole Seattle driving brouhaha, but who cares! Man, what a day!!

Pardon all the exclamation points, this card’s given me all kinds of grief, and it’s frigging crazy for it to show up just like that…

← White House Refused to Open Pollutants E-Mail
The G8: How to write about pointless international organisations →

2 comments for “Home at Last”