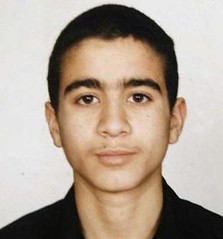 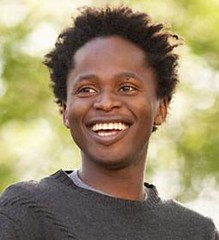 The U.S Government Department of State Factsheet about child soldiers:

Child soldiering is a unique and severe manifestation of trafficking in persons that involves the recruitment of children through force, fraud, or coercion to be exploited for their labor or to be abused as sex slaves in conflict areas. Government forces, paramilitary organizations, and rebel groups all recruit and utilize child soldiers. UNICEF estimates that more than 300,000 children under 18 are currently being exploited in over 30 armed conflicts worldwide. While the majority of child soldiers are between the ages of 15 and 18, some are as young as 7 or 8 years of age

The two (now) men pictured above were both well under the age of 18 when they were “recruited” by coercion and fraud, one by his father’s brainwashing and the other by strangers. They were both eventually found on battlefields. One has admitted to carrying arms, killing people and burning villages at the age of 13. One is accused of possibly throwing a grenade in a battlefield at the age of 15.

One of them is the author of a highly acclaimed memoir of his time as a child soldier which details his capture, long nightmare of drug induced fighting/killing, and slow and painful, if very inspiring story of rehabilitation. He now lives in Brooklyn, NY and hopes to go to graduate school. While his story has been criticized for not being completely true, most of it is shared by the thousands on other children who are made to fight their elders’ battles.

The other languishes in a cell in a prison well known for its utter disregard for all international law and documented incidence of torture. He has now been there for more than 5 years, where he has been subjected to torture threats, sleep deprivation, solitary confinement, no family visits, and utter disregard for due process.

One of them was successfully rehabilitated by a system that kept faith in him by refusing to judge him for the acts he carried out as a child soldier and slowly helped him get back to some semblance of normality.

The other was betrayed by his country and can never get out because he is imprisoned by the most powerful nation on earth.

It is very easy to point to videos/pictures of kids assembling bombs or setting up land mines and point out that they were responsible for their actions. The hallmark of a mature and civilized country is to apply guiding principles and laws equitably and without regarding popularity. A child soldier cannot be prosecuted for his/her actions, they must be rehabilitated. They will never get back their lost childhood, but they should not pay for their elders’ sins.

Prime Ministers Chretien and Harper both went out of their way to forget the fact that they lead a civilized and mature country. They fudged facts, hid behind walls, trotted out due process and stoked fears of terrorism to keep a child in prison.

Rooting for a 21 year old Muslim son of a known terrorist is not easy, especially when he was captured wounded and accused of killing Americans (the highest crime possible). But, to belabour a point, the hallmark of a mature and civilized country is to apply guiding principles and law without regarding popularity. This kid is being held for alleged actions at the age of 15. Even if he participated in battle and killed people (which apparently is the point of battle, much as I hate it), he was a child!

Will Canada eventually do the right thing? Who knows. I sure hope so. Today’s release of the interrogation video is revealing of the fact that there is a shred of hope and decency in the system. Please watch this kid being “interrogated” by people in power he thought were going to help him “go home”.

You picked up a kid in the battlefield, imprisoned him for several years. In doing so, you committed a crime far worse than what he’s being accused of, child abuse…

I leave you with Prime Minister Stephen Harper’s quote today…

“Mr. Khadr faces serious charges. There is a judicial process underway to determine Mr. Khadr’s fate. This should continue,”