Let all residents vote in Canada

BC has municipal elections in October this year and I will be voting for the candidates whose policies, values and voting records on housing affordability, harm reduction, and walk/bike/transit friendliness match mine the closest. I might even have an endorsement or three up my sleeve. This year, I will also be asking Victoria’s municipal election candidates where they stand on letting permanent residents vote in our elections.

In the 2016 census, nearly 2.5 million people identified as non-citizen residents, out of which two million were permanent residents. The permanent residents live here, work here, play here, pay taxes, grow pensions, volunteer, commit crimes (yes, they’re like any other Canadian) and more, just like those with Canadian citizenship. However, they have no say in who represents them municipally, provincially or federally. I find this unfair, so do many people, including the Vancouver city council, who passed a resolution in 2018 (PDF) calling for the province to approve voting by permanent residents. This globe news article provides a good backgrounder.

In short, municipalities have run into the conservative buzzsaw that is the state of our (mostly) conservative or liberal provincial governments. This won’t change unless more people speak up.

The opposition is mainly that non-citizens are not sufficiently “invested” in the country, they’re too “new”. The more paranoid ones talk about divided loyalties, and bring up stories of foreigners being flown in to vote. Perhaps they should try getting a visitor visa to Canada (spoiler alert, difficult).  People who judge other people’s belonging or membership, however, usually have other items on their agenda. Let’s just leave it at that.

From my perspective, extending the vote is common sense, fair and just, and that’s that.

Permanent residents? The case is simple. They’re like citizens in all ways, except for voting, and having to renew every five years. If you want to make life difficult, you could ask them to renew voter registration every five years too, but really, you shouldn’t. Are you concerned about “loyalties”? If you are, then you should not be letting the thousands of dual British-Canadian passport holders vote.

How about residents without the permanent residency paperwork? Don’t see why not? If you’re concerned about timing of residency, put a time limit on the voting registration. There are very few non-permanent residents in Canada, half a million at last count, so, impact is small.

Undocumented? May be difficult, especially with visibility and its consequences. But, I would support it if we can find a solution that protects people while allowing for verifying identity for voting.

Of course, giving people a vote does not solve most problems, but that’s not the point. We see conservatives south of the boarder ceaselessly chipping away at the right of non-white people to vote. We need to be be going in the opposite direction on representation.

So, here are the questions on this issue I intend to ask Victoria’s municipal candidates in 2018:

A “no” on #1 is going to make it difficult to vote for you. A “yes” on #1 without some coherent plan on #2 means that you need to think about it some more.

Are you with me? Would you be willing to ask prospective candidates the same questions? Should there be additional questions? Do these questions make sense, or should they be reworked?

Murray Langdon and the Role of Government

Murray Langdon of Victoria area radio and news outfit CFAX talks about municipal golf courses and tries to connect the Municipality of Saanich’s role in running a golf course with a much larger question around government, and “money”.

I’ve already been inundated with a ream of people who have stated that rec centres, garbage pick-up, landscaping, etc, has always been done by the municipality. That may be true. What I’m asking is should cities and towns be doing that. For example, we know that rec centres lose money each and every year…

The role of government, whatever level it might be, is to maximise the welfare of the people it serves, not some of its people, but most of them. So, looking at government “costs” alone in deciding the role of government is dangerously incomplete. What you actually have to do is to total up the costs for government and the people being served by the government, and judge whether there is an overall benefit to a municipality providing a service. Trying to be pragmatic about it, here are some of the things I look at:

Immediately, dumping golf, recreation, and water and sewage services into the same pot makes no sense.

Let’s look at golf, it’s discretionary, and given the proliferation of golf courses in the area, a reasonably competitive good/service (disclaimer: I don’t golf). If Saanich stopped providing golf services, some people would end up paying more, but this would not affect a vast majority of people in the area. So, I wouldn’t shed a tear if Saanich’s golf course was privatised (I would be happier if it became a park, but that’s a different argument!).

For example, we know that rec centres lose money each and every year. But we have examples of private recreation facilities, (in Langford for example) that are not only affordable but actually make money. For some reason, people assume that if it’s not run by a municipality, it will be expensive. Well, I have news for you. It is expensive and it may be because it’s run by a municipality.

I am confused, what Langford recreation centre is he talking about? (I don’t live in Langford, or hardly ever visit) The Westshore Parks and Rec Society runs the recreation centres, and it appears to be a joint effort by Westshore communities.

Putting Langford aside, clearly, the public health benefits of increased physical activity make exercise a non-discretionary item (some may disagree!) Community based (whether run by the municipality or not) recreation centres have many benefits that are not measured just by their profit-loss statements. They are often the only option for family-centric, community centric (as opposed to individual centric) recreation. I can’t go to a private gym with my partner (real) and kids (hypothetical), and have all of us participate in  activities at the same time. My partner and I would have to schedule different workouts, then enrol the progeny in a separate swimming or soccer class, find/take turns in baby sitting, etc. So, not having community based recreation increases costs to society + government, while possibly (and not always) reducing government “costs”. The social capital of having community recreation centres, the public health benefits of encouraging exercise, I could go on, the intangible benefits are high. The YMCA, which I am a member of, is a non-profit community run recreation centre, and this model works as well.

Water and Sewer – These are non-discretionary, monopoly driven services not really market based. Construction, some maintenance, value added services, may be amenable to competition, but not the management, oversight and long-term stewardship. While the BC provincial government and various Federal governments have been trying to privatise various commons resources, third-party evidence points to no cost savings.

Here’s a test: Talk about BC Liquor!

The job of a public policy analyst is to consider the costs/benefits of the society as a whole. One does not read government balance sheets the same way one would read a corporation’s balance sheet.

Are you interested in helping the Lekwungen and WSANEC Nation remove invasive plants? Here’s a press release about the event.

You and your family are welcome to join us for an orientation to removing invasive plants in Chekonein family territories, facilitated by Cheryl Bryce, this Saturday January 22nd. We’re meeting at 1pm at Camas Point (Cattle Point — at the higher side, on Scenic Drive where there’s a few parking spots by the entrance, just in from Beach Drive).

If you have some extra tools handy (like clippers, gloves, shovels), please bring them with some sort of label so you get the correct ones back. Many thanks!

For the past 150 years Lekwungen and WSANEC families have been responding to the impacts of colonization in their homelands. This project creates more spaces for local and visiting peoples to collaborate on long-term decolonizing of the land. Through the community tool shed project, local Indigenous families are providing guidance on priorities and the where, when, and how for visitors to join in this work collectively and respectfully.

The Community Tool Shed & Mapping Project is associated with the Xaxe Tenew Sacred Land Society. Currently we are fundraising so that we can buy tools for invasive species removal and reinstating native plants, including GPS equipment for mapping invasive plants in local “parks” to help plan removal and track effectiveness of different methods over time.

To get involved, or to donate tools or funds to the tool shed, please contact Cheryl <chers_canoe@shaw.ca> or Joanne <joanne.cuffe@gmail.com>.

Invasive plants are a big problem in BC, and one that requires labours of love to remove, no carpet bombing with herbicides, no industrial solution here, just lots of hands needed!

Hey! Want to watch a bunch of cool feminist folks rock out and play some original material from the first feminists’ rock camp in Victoria? Want to watch them jam with some cool musicians?

Look forward to seeing you there! Download the flier if you’d like to put one up on your fridge, or your work fridge, or anywhere you fancy.

A 48-year-old Victoria man was hit in the leg while walking on Vancouver Street near Fort Street around 12:45 p.m., said Sgt. Grant Hamilton, police spokesman

Right around the block from where I live, jeez!

And so it begins

The dreary Victorian winter is here. The temperature will drop a little from what it is now, but not much, rarely below zero, but we’ll see the sun every other week for a short while, maybe once a month!

Oak Bay has found the vehicles that fit its green policy and low speed limits — electric cars that top out at a maximum speed of 50 km/h.The municipality is drafting a bylaw that would allow electric cars on its public streets, making it possibly the first municipality in B.C. to take advantage of new provincial legislation that expands where the innovative vehicles can be driven.”I don’t think we’ll see any speed differences in Oak Bay just because we have slower-moving vehicles like electric cars,” Coun. Nils Jensen said yesterday of the impact on traffic movement in the notoriously slower-moving community. 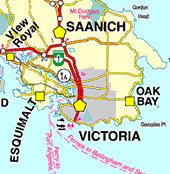 For those not in the know, Oak Bay is a municipality that is part of the Greater Victoria area. We have 11 separate municipalities, which makes for some serious inefficiencies and redundancy in administration, but does tend to preserve local character. Oak Bay, in my humble opinion, is insufferably British and proper, very wealthy and quite beautiful. And yes, it is a slow moving town, perfect for 50 kmph vehicles.

But Oak Bay is not an island, it is flanked by Victoria and Saanich, and the boundaries are not always clearly demarcated. What’s going to happen when someone randomly wanders into Saanich?

Victoria, not so quiet after all

One man is dead and two others are in hospital after a shooting near a popular downtown Victoria nightclub early yesterday.Officers were called to the scene around 2:50 a.m. after a report of shots fired outside 751 View St., between Douglas and Blanshard streets.Yesterday morning, forensic investigators inspected the body as it lay covered by a white tarp on the edge of the sidewalk in front of the exit to the View Street city parkade, about two buildings down from the Red Jacket nightclub.

One dead, two in hospital after shooting outside bar
Yikes…